A Great Reserve, therefore, to be bottled separately only in great vintages. I was aware of the fact that the process would be much longer – and more difficult and costly in terms of resources and energy – than a simple assemblage. However, I was – and still am – thoroughly convinced that by tackling the problem at its roots with judgement and painstaking patience and application, I would be able over time to obtain the desired results. In order to achieve this I had to take action at the source, at the real and only origin of every great wine – i.e. the vineyard – by introducing all the changes that could bring about the improvements in the vineyard, vine and grapes that would allow them to express themselves more completely.
So I had to:

My father Giuseppe – “Gepin” to his friends – had already clearly identified an area within the MONPRIVATO vineyard (a “tourna” in the local dialect of the Langa), where a particular clone of Michét planted by his father Maurizio in the early 1920’s provided higher quality results. At the end of the ’50s “Gepin” selected these Michét vines, multiplied them, and – in 1963 – planted them on the sites marked by the numbers “2” and “3”.

It was this very “Michét clone” which, when my turn came in this special “relayed” vineyard experience handed down from father to son, I vinified separately in 1970 to produce the first vintage of Barolo MONPRIVATO.

A Barolo, this MONPRIVATO 1970, that when it is tasted thirty years later shows itself to still be incredibly young, and brimming with all its components: bouquet, body, depth and length, astonishing anyone who has the opportunity to try it. It is very convincing and intense, including its color. So it seemed clear to me that this clone should be used to make a great MONPRIVATO “riserva”. And the only way of continuing to provide the “normal” Barolo MONPRIVATO with the positive contribution of this clone was to select it with patience and care, graft it, multiply it, and plant it in another “tourna” (or part of the vineyard). The leading technicians had taught me that every new selection brings further benefits, and they were proved right.

Thus, in 1983 I began to select the best vines of this old clone of the Michét subvariety of Nebbiolo that had been replanted by “Gepin” and given the benefit of acclimatising to the MONPRIVATO vineyard’s particular soil and microclimate over a period of more than half a century. In March 1987, at the end of the fourth year of selection of the 3860 vines I had started out with, I was able to pick the buds of the 283 plants that had provided the best results in terms of constant quality over each of the four years of assessment and in all the vegetative phases: shooting, flowering, setting, veraison and ripening. I grafted these onto not very vigorous or productive rootstock which was almost in disuse, and planted them in a nursery which had been specially prepared for their reproduction. At the same time I identified two areas of the MONPRIVATO vineyard where I would proceed with the uprooting of the old vines and the replanting of the new ones, marking them on the map as “1N” and “2N”. At the end of the 1985 grape-harvest I eradicated the vines on site “1N” (area 1.02.12 Ha.)

In 1986 major work was carried out on the land from which the vines had been removed:

the earth was broken up, and large masses were brought from the base to the surface in order to return the soil to its original conformation, and from a depth of four meters to extract unexploited, virgin soil which still had a very high content of the natural macro and micro-elements – limestone, boron, iron, magnesium, manganese, potassium, etc. – that are essential to the vine for high quality production;

drains were constructed to convey any underground water and protect the soil from erosion.

During this earth-moving and draining work, blocks of arenaceous tufa with algae and shell-fossils imprinted into them were found at a depth of four metres, testifying to the marine origins of these hills.

When this work had been completed, the ground was left to lie fallow for three years without any form of cultivation. The mechanical and manual work required to preserve it from any weeds was performed annually, and the virgin soil was aired to help it mature.

Finally, in the spring of 1988 I planted the new Nebbiolo vines – Michét subvariety – that had been selected and multiplied at a relatively high density – 5680 per hectare – for a hillside vineyard. 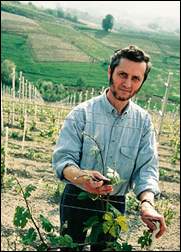 Looking back now, the entire operation could be considered to be a genuine experiment designed to improve a clone genetically; more the concern of a research institute or a public body than of a private vine-grower.

The philosophy which has been followed in the management of this new vineyard is based on the application of the rules usually kept to over the remainder of the MONPRIVATO vineyard and every other vineyard on the estate: to achieve “raw grape material” of perfect quality from every point of view:

I understood that in order to obtain even more significant results I would have to take to their limit the rules and restrictions already adopted by my family in the past in the tending of the MONPRIVATO vineyard, so I applied them during the practical application of the project as well by performing:

In the specific case of the “Cà d’MORISSIO” selection, in the first ten vintages to date the actual production of grapes has fallen each year within the maximum limit of 4400 kg/Ha., which correspond to 30.8 Hl./Ha. on racking, and 775 grams per vine.

During this stage of the “Cà d’MORISSIO” project I continued to adhere strictly to the rules in protection of the environment and the land on the site set out above for the “1N” phase.

This involved: extreme limitation of the number of treatments using agricultural chemicals, and integrated pest management only when essential; rejection of the use of herbicides to eliminate the weeds that overrun the vineyards; and the exclusive use of mechanical means, integrated by hand-hoeing.

I should point out that my way of working is stricter than the rules laid down by EC Regulation n°2078/92, which allows the use of certain types of low-impact weed-killers.

Like the entire production of the estate, the wine-making process used to make the MONPRIVATO “Cà d’MORISSIO” selection is traditional, with the fermentation followed by a long maceration of the wine must in contact with the skins for 25-28 days, while the juice is softly pumped over the cap to extract all the noble tannins in the grapes. The wine is then matured in casks of Slavonian oak holding 25-27 hectoliters which are not new but undergo careful maintenance.