GIUSEPPE MASCARELLO 1830-1902
It was the vine-tender Giuseppe Mascarello who began the family business back in 1881, in the village of Monforte d’Alba, where he purchased a site in Regione Pian della Polvere.

Giuseppe’s son Murizio Mascarello, bought a farm in the “MONPRIVATO” area of Castiglione Falletto in 1904, moving the business there and producing Barolo grown on his MONPRIVATO vineyard. The grapes grown on the farm were insufficient, however, so Maurizio began to complete his production with Dolcetto and Barbera wines using selected grapes grown in the best positions and purchased from reliable vine-tenders in the area. In 1919 Maurizio purchased an old 18th-century building in the village of Monchiero (between Barolo, Monforte d’Alba and Dogliani). Pride of Piedmontese civil engineering of the 1700s, it had originally been used for storing and selling natural ice, but following renovation work Maurizio moved the winery there, and its structural features and ability to maintain a steady temperature throughout the seasons immediately proved ideal for the storage of wines. Maurizio also ran a building materials business as a sideline. In 1921 he planted part of the MONPRIVATO vineyard with Nebbiolo vines grafted with a special clone of the Michét variety.

Giuseppe took over the running of the family firm – assisted by his brother Natale and sisters Giuseppina and Adelaide – when his father died in 1923. Very soon though, different points of view on the philosophy of the business and the way it should be run forced Giuseppe and Natale to part company, dividing the property and marketing areas into two. In the first half of the 1930s, Giuseppe decided to abandon the more profitable building materials business to give himself over completely to his calling: the production of wines of outstanding quality. In the late fifties he replaced the old casks in the cellar with new Slavonian oak casks made in Italy according to special new criteria, and using wood selected personally – together with the master cooper Severino Comola – in a particular area of the forests of Slavonia. The production of Barolo increased considerably, though his excellent knowledge of the best vineyards in the Alba area and perfect mastery of the wine-making techniques meant that the quality was kept intact. At various times during his life Giuseppe grubbed and replanted the Nebbiolo vineyards. In particular in 1959, when he selected a clone of the Michét variety planted by his father Maurizio in 1920, replanting it in 1963.

Numbered amongst the admirers of his Barolo were leading representatives of the world of art in his day, including the painters Eso Peluzzi, Felice Carena and Luigi Delleani, the art critic Orio Vergarni, the printer-publisher Alberto Tallone, and some of the most prestigious Italian Embassies abroad.

Having reconstructed the wine-growing history of my family, the time has now come to speak of my own experiences. I first worked in the winery for many years alongside my father, before taking on the responsibility of running the cellar in Monchiero in 1967, when I also made my first wines. From the 1968 to 1977 vintages I experimented with fermentation systems of different lengths, varying the intensity of the breaking up of the cap and the pumping over of the must, with results which were not always satisfactory. Following this cycle of experiments, I went back to using the traditional long fermentation, though making some substantial changes, such as a reduction in the length of the maceration from 60 to 40 days, which was further reduced to thirty days in the early eighties. In 1970 I began to vinify the grapes grown on each single vineyard separately, starting with the MONPRIVATO Nebbiolo and then proceeding with the other vineyards. Upon the death of my uncle Natale in 1979, I purchased his company, re-uniting it into the Azienda Agricola Giuseppe Mascarello e Figlio. In 1980 I assumed direct responsibility for the family’s MONPRIVATO vineyard, continuing to run it with the same philosophy: application of the techniques that have always been followed to obtain the highest quality of “grape raw material” from every point of view: 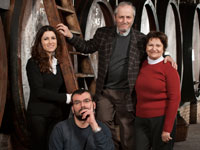 My farm is now run with the help of my wife Maria Teresa on the accounts-administration side, and – though not yet full-time – my son Giuseppe, who qualified as a wine technician from the Agricultural and Enological Institute in Alba in 1994, and then chose to specialize in the administrative and legal field, enrolling in the Faculty of Jurisprudence at the University of Turin where he is completing his thesis.